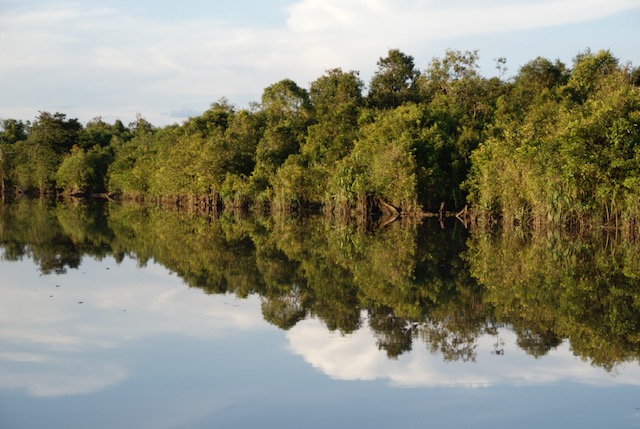 The forest has always been more than the sum of its trees. It is familiar with being a place of longing and a habitat, to deliver firewood and construction material and at the same time to fulfill all the important ecological functions. Our requirements have already put this ecosystem under tremendous pressure and in many places around the world have contributed to the fact that the forests are exhausted or have been destroyed. Regardless, now the forest should also protect humanity from a possible climate collapse and serve as a raw material storage for the economy of the future – the so-called bioeconomy. This cannot go well.

But let’s start at the beginning. At this year’s UN climate summit in Glasgow, the political leaders surpassed themselves in a kind of outbidding competition to determine which country wants to save most of their forests from deforestation in the name of climate protection. At the same time, generous reforestation initiatives were promised. A total of 137 governments, whose nations are home to over 90% of the remaining forest area, promised comprehensive forest protection. In the “Glasgow Leaders’ Declaration on Forests and Land Use”, the powerful discovered the forest as a climate saviour. What are we to make of this?

First of all, the credibility of some of these self-proclaimed forest protectors is close to zero. For example, there is Brazil’s Jair Bolsonaro, who has attracted attention in the past for opening up the Amazon rainforest to illegal logging and gold prospecting and for trampling on the rights of indigenous peoples. To see this climate denier given a stage in Glasgow to make empty eco-promises is just unsettling. Not so much better is the fact that nations like Malaysia or Indonesia, which have converted their forests on a large scale into lunar landscapes made of oil palms, are now among the supporters of the Glasgow Forest Declaration.

Moreover, it is almost certain that countries that reforest large areas with eucalyptus for the pulp industry will also do so in the future in the name of climate protection. This is the case in Mozambique, where international investors are expanding huge monocultures, robbing from the local population their land and their livelihood. Planting trees thus becomes an aggressive act against humans and nature. Under the guise of climate protection, this might become even more effortless in the future.

In terms of climate policy, not only in the Global South things are getting completely out of hand. In the declaration, the european industrial nations such as Great Britain and Germany also praise the importance of forests for the global climate, while doing exactly the opposite on their own doorsteps. With the blessing of the British government, the Drax power station in northern England burns millions of tonnes of wood for electricity, and Germany, which likes to give unsolicited climate advice to the rest of the world, also burns a larger proportion of its annual timber harvest. The carbon stored in the raw material wood is chased through the chimney and ends up in the atmosphere as a greenhouse gas. But it could get even worse: The German government, which is still in office, has plans in the pipeline to subsidise the conversion of old coal-fired power plants to wood-fired ones with public funds.

And let’s not forget the bioeconomy: the economic system that claims to be something like the future beyond the fossil age. Instead of coal, gas or fossil oil, only renewable primary resources are to be employed. At the beginning of November 2021, there was once again a small foretaste of what the organic future could look like – at least when the industry is in charge: The Finnish forestry and paper company UPM-Kymnene proudly announced that its biorefinery in Leuna, Saxony-Anhalt, will soon supply the Coca-Cola Company with polymers. The refinery needs wood to make the polymers, which are then used by the US company to make beverage bottles that were previously made from crude oil. It is reasonable to ask whether there are not more meaningful bioeconomy applications than filling American sugar soda into plastic bottles. Coca-Cola ultimately turns the so-called star investor Warren Buffett into a billionaire and numerous children into obese diabetics.

Now it’s not particularly difficult to make a little fun of Coca-Cola But the example shows quite well what would be lacking in a bioeconomy: control! Of course, the world needs fresh ideas if fossil resources are to remain in the earth from now on and in the future. And possibly a bio-based economy is part of the solution. However, in order to be able to assess this seriously, first a kind of inventory should shed light on how much the global forests are capable of providing, in a socially just and ecologically sustainable manner. It should be factored in the fact that forest areas for biodiversity conservation or climate protection are further reducing the amount of biomass harvest. And finally, it is still unclear how a meaningful management of scarce raw materials could take place in our profit driven economy. So far, the rule has been: whoever pays the best price gets the deal. Which brings us back to Coca-Cola, which probably can put more money on the table than an eco niche startup.

Sadly, the federal government’s bioeconomy strategy too, is silent in regards to which rules could be decisive for this economy. The paper has no shortage of obscure sustainability promises, instead concrete policy proposals are lacking, that would allow a bioeconomy to operate within the planetary boundaries. Now, this is one of the tasks of the Bioeconomy Council, which has been assisting the federal government for almost a year in its third edition. Of all people, will this motley collection of 20 experts, recruited from the biotech lobby to the environmental movement, be able to develop the necessary strength? Ultimately, everything depends on the political will of a future federal government as to which guard rails are enforced for a bioeconomy.

From climate protection to the responsible supply of natural resources: Forests are indispensable. However, the capacities of this ecosystem are limited. This is precisely why the industrialised countries will have to dramatically reduce their consumption of raw materials. Otherwise, there will be a global devastation.